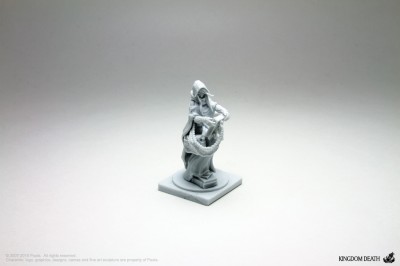 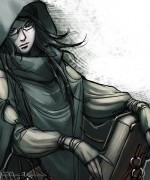 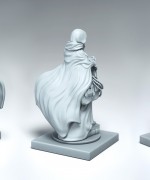 Stories lament the fall of the Grand Library in hushed tones. The surviving archivists and their sworn knights fled clutching precious armfuls, all that remains of the knowledge assembled by humanity. Today the Twilight Order is scattered, working in isolated pairs to do and record what little good they can.

This is the first model Hector Moran 3D-sculpted for Kingdom Death, based on the original art by Yasmine Putri. It got printed, molded and was then remodeled into a version that was released as the Archivist. Moran was not that fond of her “artistically and technique-wise”, but is still attached to the fact that it was his first piece for KD as well as his first foray into 3D modelling and printing. Previously only released in Grab Bags, this legacy model dubbed Laurie the Librarian, was sold as the Encore run of the Archivist during the 2018 Valentine’s Day Sale. It is unknown how many of the run (if not all) were actually the Librarian instead of the Archivist. Box and art cards of both releases are identical and the text on the small art card reads ‘Archivist’, even though the actual resin model is different.