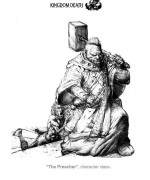 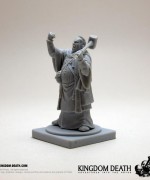 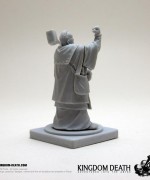 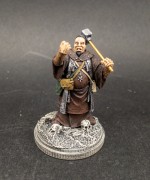 Standing over his fallen companions hoarsely crying devotions over the screams of battle. As terror extinguishes hope, the questionable dogmas begin to make sense, inspiring the wretched to feats of reckless strength and steadfastness.

The Preacher miniature went through an interesting design process. The original concept was drawn by Yasmine Putri who gave us both the Twilight Knight & the White Speaker. However, that character design will be used for another facet of the project ( which will be revealed later! ) and we needed a more "intense" version of a Preacher to be used as a board game character class.

Enter the extremely talented Raul Garcia Lattore of Enigma Miniatures. We are just overwhelmed with joy that Raul is working with us, taking precious time away to grace the world of Kingdom Death with his unique sculpting skills! We entrusted Raul to alter the original character with his own vision... and we just couldn't be more pleased with the result!

Finally, it was Danny Cruz who provided an appropriately serious looking illustration of the second Preacher. An intense image of the Preacher pushing forward up a flight of stairs, while a terrified companion clutches his robes pleading for him not to go on!

The Scribe
The Lonely Tree